I literally learned more about the birds and the bees today!  House sparrows built a nest inside my juniper right beside my front door.  I had been spying on the two babies, who left the nest yesterday.  The parents wasted no time, because today there was another egg!  I found out about feeding, mating, and incubation here: 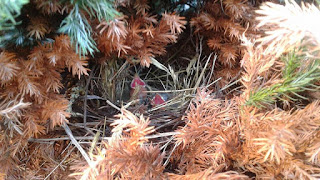 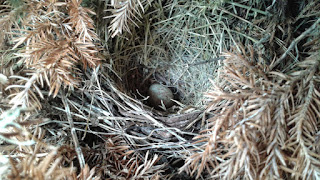 Earlier today, I went to Borders Farm in Foster, RI for "The Secret Life of Insects", sponsored by The Northwest Rhode Island Supporters of Open Space.  The farm grows for food banks (which you should too; check out Ample Harvest for donation sites) and has much biodiversity in its ecosystem.  Insects were mainly featured at this site, including water insects like whirligig beetles, water striders, and oarsmen.  Kids and adults found several types of grasshoppers, dragonflies, damselflies, bees, and more.  One young girl found an American toad beside a stone wall.  I found an enormous black true bug with a yellow oval on its thorax that I did not manage to photograph or catch, but I did find and catch a tiny preying mantis, a large beautiful garden spider, and several other arthropods.  Their insect collection kit is available for loan to groups.  Contact nrisos@cox.net 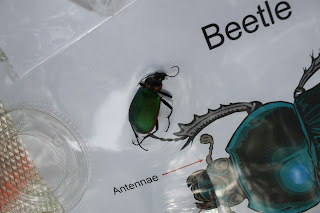 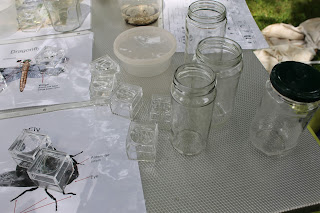 I had just released the mantis and spider in my own garden to introduce new DNA to the similar species I have found in my yard before, when I saw this unusually large bee frantically buzzing around and grabbing onto a smaller bee.  I had not noticed this species being aggressive before, so I feared it might actually be a Robber Bee, a relative of the horse fly that carries off and eats bees.  After several failed attempts, my partner and I managed to catch this swift and noisy flier to get a better look. 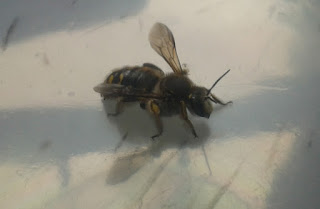 Megachilid (leaf cutter bee) is a fairly docile species, but what we thought were sting attempts as it buzzed angrily inside the jar (most bees calm down quickly) were then reevaluated as fluid was released from the apparently male bee.  We released it back to where we found it, so it could join the much smaller female it had been chasing.

All photos © Melissa Guillet unless otherwise noted.
Posted by 15minutefieldtrips at 12:24 PM No comments: 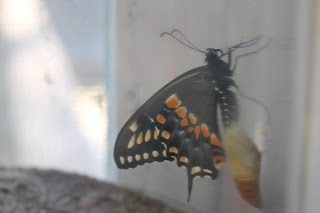 Three chrysalises visited Mastery Camp Smithfield yesterday. Look who emerged this morning! Kids learned about camouflage (black swallowtail caterpillars transform into green or brown pupas to match their surroundings) and made preying mantids with cardboard tubes, sticks, and leaves.  Caterpillars were collected at Waddington Elementary in Riverside, Ri, where we grow dill especially for them!  Black swallowtail caterpillars eat the leaves of dill, carrot, fennel, parsley, parsnip, Queen Anne's lace, and others in that family while the adults feed on the nectar of flowers, including  milkweed, thistle, red clover, and zinnia. 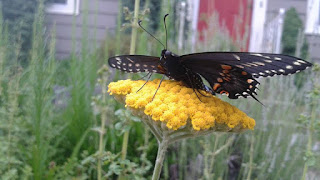 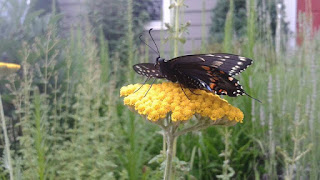 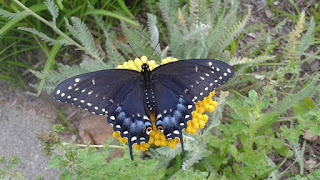 All photos © Melissa Guillet
Posted by 15minutefieldtrips at 7:19 AM No comments: