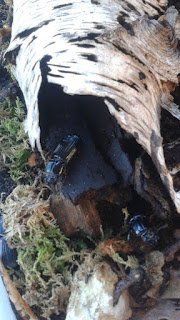 I once heard that the more "pet" names a person or animal has, the more they are loved.  Odontotaenius disjunctus, commonly referred to as the Horned passalus, is also known as Bess beetle, Bess bug, Betsy beetle, Patent leather beetle, Jerusalem beetle, horn beetle, and peg beetle.  They are large (1.2 - 1.6 inches), shiny, and black, with a tiny horn on top of their head and between the eyes.  Their abdomen is striated (grooved with stripes) and they have golden setae (hairs) in between body parts.  Their antenna have 10 segments then end in a three-point club.  They have string mandibles (jaws) for chewing wood.  They range throughout the Eastern United States, with a slightly different species occupying Florida.  The other 500 identified species live in tropical climates from Mexico through South America.

These insects are detritivores (they eat dead plants), chewing up dead logs and using the masticated (chewed up) wood for frass nesting and shelter.


Unusual to most beetles, they live in family units in those logs.  Both males and females help raise young and build nests for larva.  They are territorial and will eat injured larva.  The eggs are large so the beetles can easily carry them and are grouped together in frass (powdery refuse from boring wood).  Larva are white grubs that feed on the predigested wood and dung of the adults.  They may go through three instars (form changes).  They start as a pearly white with a rainbow sheen, then off-white or earth-colored, then translucent before emerging as adults. The larva only use the first two pairs of legs to move about, the third pair being reduced in size until adulthood.  New adults are red before their exoskeleton darkens.  They will use their wings to find a mate and start an aggregate elsewhere.  Otherwise, the wings are not used. 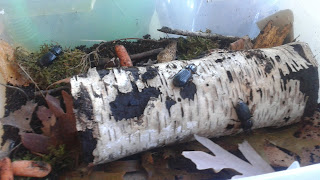 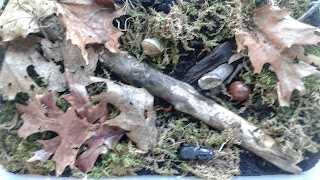 Another creature you will find among these beetles are tiny mites.  The mites are not harmful to humans.  You'll find them crawling on the adults.

These beetles prefer hardwoods such as oak and elm, but I've seen them eat up birch quite happily.  The best conditions are slight moisture with microflora and fungus.  These help them digest the wood.  A rotting log found in their usual habitat outside should provide all this.