A baby owl is called an owlet.

The most common owl in RI is the barred owl.  That’s barred with a double “R”, not to be confused with Shakespeare and our Shakespeare in the Park and Roger Williams National Park.  I think heard a screech owl there.

A group of owls is called a Parliament.  Kind of what Canada has.  I want to move to Canada…

Owls borrow other birds’ (or even squirrels’) nests in the winter to lay eggs.

Owls are raptors and hunt prey, crushing it in their strong talons, swallowing their prey whole, and coughing up a pellet of fur, feathers, and bones.

Owls are zygodactyl, with two talons in the front and two in the back, and can exert 500 lbs.of pressure per square inch.  Do not shake hands with an owl.

Some owls bob their heads to better locate prey through sound.  This is called the night moves.  Okay, it’s not.

The great horned owl’s “horns” are feathers, not ears.

Owls can’t move their eyes.  Instead, they turn their heads up to 270 degrees, kind of like the child in the Exorcist movie.

Throwing food out your car window kills owls.  Rodents and other animals go into the road for the food, and the owl swoops in, and…  Owlsare not Batman.

Owls are not the fastest raptors, but they have specialized soft feathers that make them the most silent.  Silent is deadly.

Tickets also available at the door.

Posted by 15minutefieldtrips at 6:27 AM No comments:

URI MASTER GARDENERS and Ocean State Job Lot are giving away FREE seeds
Saturday, February 18, 10am - 2 pmat the Hempe House, East Farm
Spring is coming and this snow is adding wonderful moisture to the soil.  Get ready by stopping by Hempe House on Saturday, Feb. 18 between 10 and 2 and picking up free seeds. Take as many as you can carry.  Bring your own bags.  Start them at home, with a scout troop, at a community center...  Pay it forward by planting some herbs to give away to friends, a senior center, or a food pantry.
Check out how we grow herbs at our school: Milk Pot Plants.

Our GoFundMe page is here.
Posted by 15minutefieldtrips at 11:11 AM No comments: 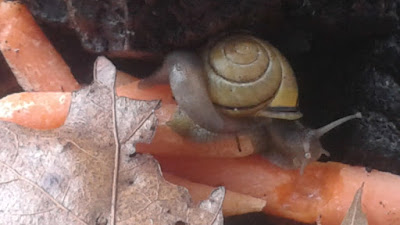 What do I love about nature?  The calm it gives me?  The complex network of interactions and food webs?  The excited look in a child's eye as they hold a worm or discover baby pill bugs?

My fourth graders have been studying detrivores and trees, from rotting logs up to the tallest habitats.  This week, they imagined they were shrunk down to the size of a shrew, then a millipede, then got to soar as a bird through an activity in the Project Learning Tree Environmental Education Activity Guide.  We then drew, colored, and cut out animals that are part of that food web.  In May, all three 4th grade classes will take a bus to a manged forest as part of the Wheels to Woods grant I succeeded in getting for our school through RIEEA.  They are very excited!

I hope their love of the tiny and the tall leads them to protect these habitats when they are able to act as adults, through legislation, running for office, voting, participating in clean ups, and supporting environmental agencies.

There is a fundraiser March 3rd to support publication of a field guide, supplies, perhaps even non-profit status!  It will be moved to the Mediator, at 50 Rounds Ave. Providence, RI, from 6-10.  We'll still have live music and games, but home-made snacks instead of a sit-down dinner.  (Ticket sales were too low to have it a Twelve Acres.  There goes my deposit...)  We also have a GoFundMe page here. 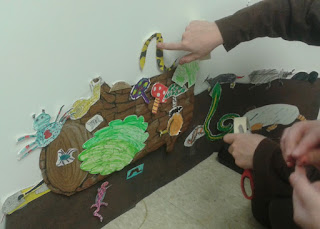 Posted by 15minutefieldtrips at 6:31 AM No comments: 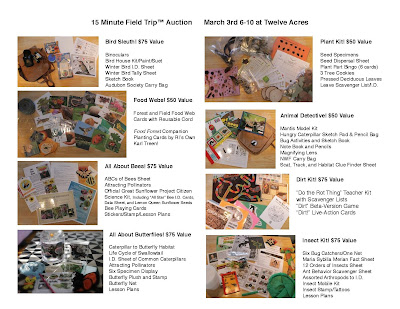 Imagine this:  You have a school garden, a summer camp, a scout group, an after-school program, and you don't know a lot about the animals and plants all around.  What do you do?  15 Minute Field Trips has been providing educational resources through its website, blog, and workshops.  Now we want to create a field guide with easy-to-use infographics that tell you all about the outside world!

There'll be a page on ant behaviors your group can look for, all the wonderful facts and uses of dandelions, how seeds travel, how to identify native bees, what's a host plant, what can moss and lichen tell us, how do detrivores work, why goldenrod is a good plant and NOT an allergen, how to look for animal clues, what's the deal with food webs, can caterpillars be raised indoors and released as butterflies and moths, how many life forms inhabit an oak tree, can you find an insect from all 12 orders, and much, much more!

This guide requires more research, a better camera, time, and your financial help!  Besides our GoFundMe site, we are having a gala where you can try out, bid on, and raffle for and possibly take home the above items and more!  It will be a great networking opportunity and great live, local music, games, and fun!

Tickets available for a limited time!!!