March 7th 10-11:30 we're back at Blackstone Park to learn about frogs and toads by Irving Pond. https://www.blackstoneparksconservancy.org/events/frogs-toads/

Then I'll be doing a workshop on trees as part of the Land and Water Summit.  https://landandwaterpartnership.org/summit_register.php

3-B. Art for Environmental Advocacy

Melissa Guillet - 15 Minute Field Trips
Learn how to teach complex environmental concepts through art and engage the
community in dialogue and action plans. Participate in a variety of art projects
including song, dance, costume design, and drawing, and connect them to
topics such as climate change, carbon sequestration, erosion control, and even
fish migration! Leave with ideas to develop programs for your organization
to engage families, partner with schools and youth groups, and more.

THE EVENT BELOW WILL BE RESCHEDULED:
There will be another free talk March 21st at the Cranston Library 2 p.m.
http://www.eventkeeper.com/mars/xpages/C/CRANSTON/EKP.cfm?curOrg=CRANSTON&curMonth=3&curYear=2020&SelectedDate=3/21/2020#3/21/2020


Nature Systems in Your Backyard @ Central Nature is full of interlocking systems where nothing is wasted. Learn how to garden and landscape sustainably, how to attract more birds, butterflies, and pollinating bees, and how to create a welcoming habitat in your backyard.Presenter Melissa Guillet, Master Gardener, is an educator and expert on many topics including sustainable gardening, pollinators, and backyard habitats.This program is presented in collaboration with the URI Master Gardener Program and is the first of three sessions in our Spring Forward series. All events are free and open to the public.
CONTACT: Reference Department  401-943-9080 x3  central@cranstonlibrary.org
LOCATION: Central James T. Giles Community Room

April 4th we're at Blackstone Park to look under logs.  Then there's a kid's class on fish at the HeArtspot gallery 1-2:30.

See you outside!
Posted by 15minutefieldtrips at 6:27 AM No comments:

A Sense of Place 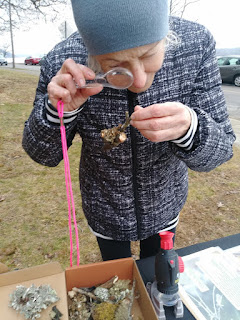 I run a monthly nature experience at Blackstone Park Conservancy where I'll have an information table and art activity that extends into a way to explore the park.  We've explored insects, spiders, broadleaf trees, and winter birds, among others. It's an outdoor program, so weather is always a concern. So it was no surprise when rain forced us to reschedule the January event two weeks later. Of course, two weeks later, it was 17 degrees.

Our theme that month was cones and conifers. I was well-prepared with samples of cones from many types of evergreen, from Douglas fir to white pine. There were clip boards with infographics I had put together making it easy to type different conifer families. I even had information on the Wollemi pine, or "dinosaur tree", that had been saved from the Australian fires.  But it was 17 degrees. And no one came.

The only other person out there was Harold. He comes regularly to tend to the ducks.  There's a raft of about 40 mallards that flock to him when his car pulls up. These ducks know Harold. And Harold knows them. Not only does he feed them, but he knows many of their back-stories. Some he's released from fishing line. He's seen two hit by a car and was only able to save one. He knows how another got its scars.  Blackstone Park is a very popular place for bird watchers, and Harold can identify many of the waterbirds that visit. He's more than just a visitor, though.  He is a steward.

The following month I did not advertise well as it was February and I expected more inclement weather or cold. But I was there as faithfully as ever, setting up my table with a table cloth and new clipboards. No more taping pictures down!  Remarkably, it was in the mid-forties that day. And people started to come... 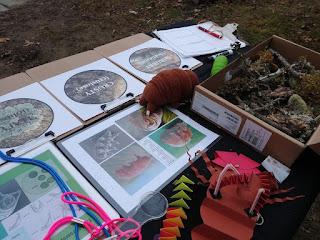 People of all ages showed up! First, an older couple waiting for their grand-kids. Then families, other couples, a single woman. I invited them to explore the moss and lichen I had collected. We discussed symbiotic relationships, climate change, biomimicry...  How moss can insulate buildings and and certain lichens are used in medicines, dyes, and other industries.  Kids ran off with magnifying lenses to find their own. We looked at samples under a microscope and learned about the radical survival skills of tardigrades, also known as water bears or moss piglets.

Twenty two visitors in all took time in their day to learn about nature and how we can work WITH it, be part of the interconnected web.  Do you have a lot of lichen on your trees?  Maybe even the shrubby kind?  The more the merrier! Many are sensitive to pollution, so if you see a lot, that indicates cleaner air.

And it's not hurting your tree. Lichen is just a relationship between a fungus and algae and cyanobacteria.  They work together to make a home and food.  Similarly, we wouldn't be able to live without the help of mitochondria in our cells. Perhaps by studying nature, we'll find more ways to work together.

Join us March 7th 10-11:30 when we learn all about frogs and toads!  You can download our lichen activity here. 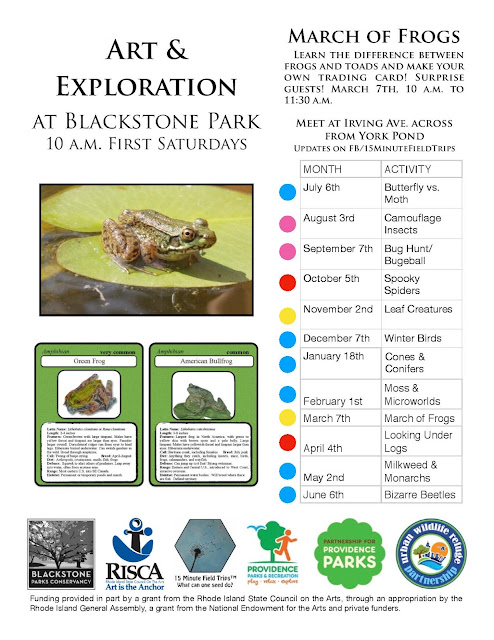 Posted by 15minutefieldtrips at 6:40 AM No comments: 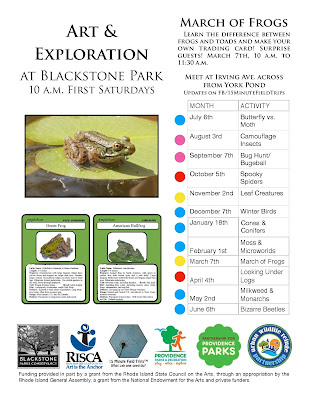 Need a nature or art break soon?  We have lots of workshops coming up.  For February vacation at the HeArtspot gallery, we have;

At Adventure Base Camp in Cranston, we have:

Finally, save the date for the "March of Frogs" at Blackstone Park March 7th!  See our flyer for details.
Posted by 15minutefieldtrips at 6:30 AM No comments: