We Will Not Be Silent Spring

I just had the most WONDERFUL experience of Bioblitz, where scientists, artists, and lay people get together to identify as many species as possible to record the biodiversity of a selected area.  This year it was at Snake Den State Park in Johnston, RI.  There were the usual teams: The "birders" who can identify birds by sight and sound, even if it's a mockingbird singing like a lark, the mammal crew, the moss seekers, the lichen table, the mushroom hunters, the creative writers, the artists, and more.  This year, I went to collect bees and help out with the litter bugs.  I did a bit of drawing and photography as well.

Walking down Brown Ave., I found a butterfly I had never seen.  I caught it with my net and took it back to identify.  It stayed on the cup long enough for me to get a picture.  Red-spotted purple. 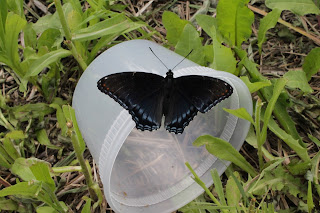 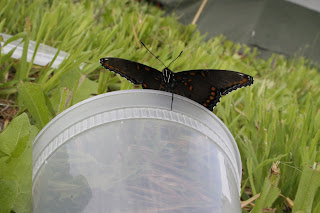 Then, following the dragonfly team through the fields (in long pants, of course!), I found over a dozen of these guys chewing on the plantain.  I was told they used to be rare, until they diversified their food choices.  Baltimore butterfly. 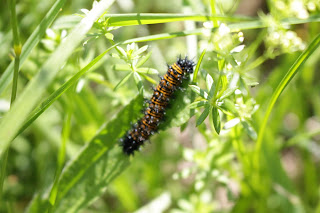 The dragonfly team identifies another one! 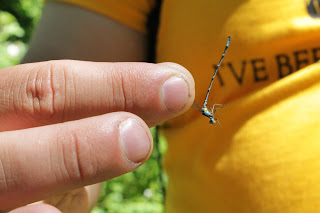 The beetle guy always has such interesting finds, as beetles are such a diverse order.  I found this one near the base of a tree and a whirligig in one of the many small ponds. 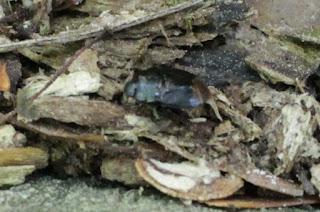 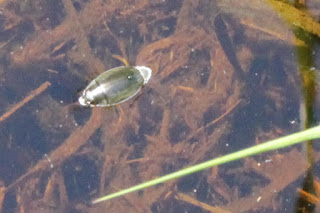 This is of course a spittle bug, one of the "true bugs" among many. 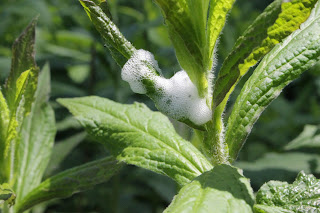 The many moths found at Snake Den: 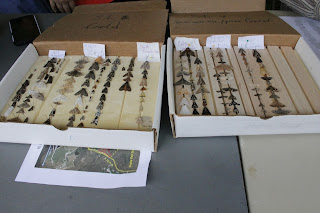 And many ants as well. 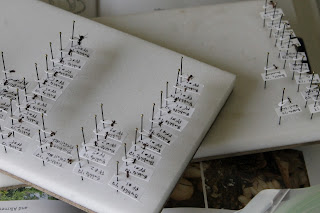 No final numbers yet, of course.  I collected bees by hand and found six species, which I tentatively labeled as the genus Bombus impatiens, Bombus sp. 2, Ceratina, Perdita, Sphecodes, and Apis mellifera.  The ant collector found an Agapostemon, I believe.  Another person used "bee bowls", placing bowls with sugar water ever ten? feet for a 150 feet and found bees mostly different from mine.  Most appeared to be from Family Hyalictidae.  We went back and forth trying to identify them, comparing body proportions, abdomen and wing patterns, length of antenna.  I'm only fairly certain of the Ceratine because of it's size and white mark on its face.  It is a difficult task, and the specimens will be going to an entomologist at URI to identify species. 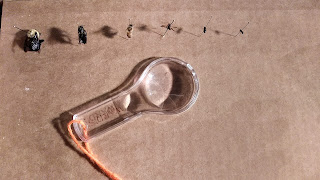 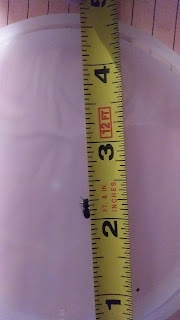 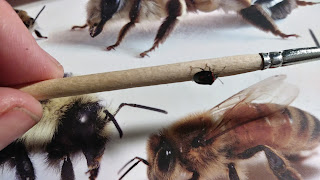 As always, there were amazing varieties of lichen, moss, and mushrooms: 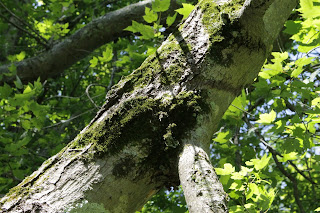 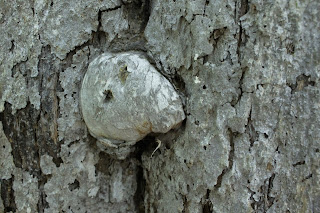 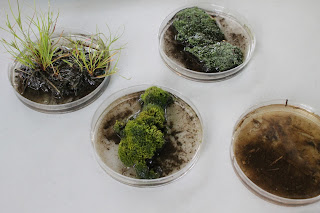 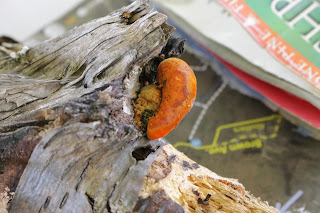 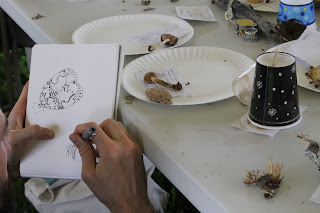 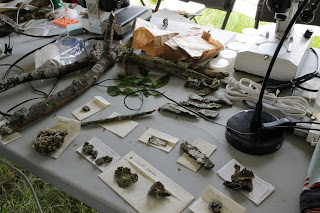 Other unexpected finds were what must have been a 6 foot snake skin and a skeleton of what I was told was a fox.  One of the highlights for me was finally finding a tardigrade!  I found rotifers and nematodes as I often do.  But thanks to Leslie on the Litter Bug team, she found this little guy from a scraping I had taken off an oak tree: 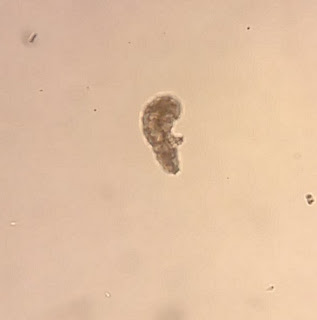 
An more pics of this cutie!  Next time, I'll bring my microscopic camera and hope it works. 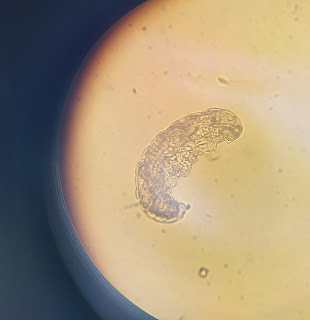 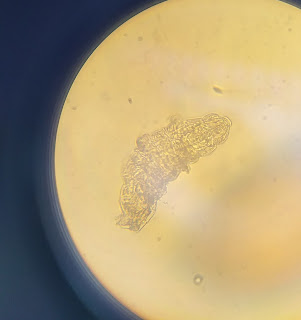 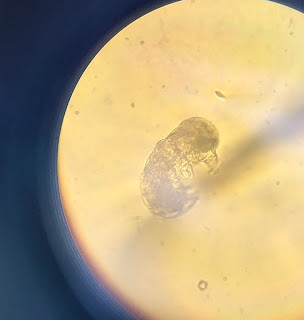 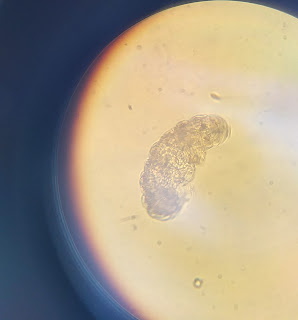 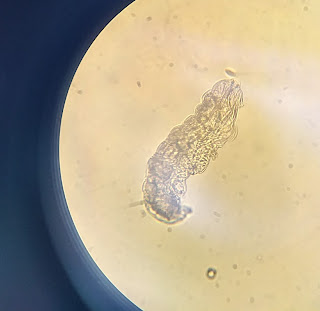 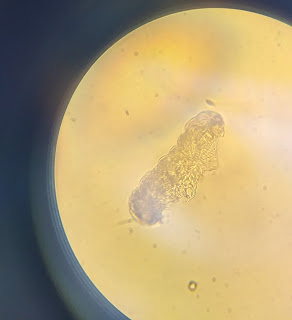 It's a 24 hour experience.  Camping out, I walked to my tent under a full moon, adjusted my sleeping bag so I wasn't facing down-hill, and fell asleep in minutes.  Next year, I'm coming with friends! 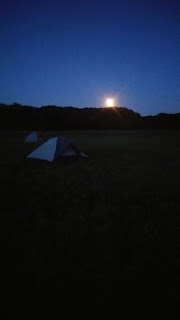 Oh, one more thing.  I also collect data for Frog Watch.  Three years ago, all I heard from this man-made pond in an urban spot near 295 were spring peepers.  Last night, there were bull frogs, green frogs, and gray tree frogs.  They were not being quiet.


Posted by 15minutefieldtrips at 2:27 PM No comments: 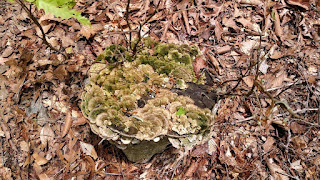 I am very excited about participating in Bioblitz at the Snake Den in Johnston, RI this year!  I am part of the art team and will also be collecting bees for identification and looking for microscopic critters in moss.  Stay tuned...
Posted by 15minutefieldtrips at 5:12 AM No comments: