Life began in the ocean.  Unicellular creatures, algae, etc. evolved into surveying salamanders, pioneering lichens, and more and more complex plants and animals.  Today, algae and microscopic creatures still form the base of many food chains.  Sensitive frogs and salamanders are threatened by pollutants and invasive species.  The warming seas recently lead to the death of TWO THIRDS of the Great Barrier coral reef, also the base of a large food web.  Without water, there would be no life.  Without clean water, biodiversity and all it connects with suffers.  What can be done?

I showed my students a picture of Peanut, a red slider turtle who got caught in a soda ring while she was still quite small.  Without opposable thumbs and access to scissors, she continued to grow, but growth of her shell was constrained by the thin plastic ring.  While her limbs have not been affected, her lungs, which should be oval-shaped, look like butterfly wings.  This affects her breathing.  And most noticeably, her shell is shaped like a peanut!

I had the third graders try to figure out how she got like that.  Some thought her shell got squeezed. Eventually, they figured out she had been in that soda ring for many years.  Then we brainstormed how to prevent this from happening to another animal.  We could cut and recycle the soda rings, buy soda that doesn't come in rings, keep our trash tightly covered so wind doesn't carry it into waterways, and help clean up at creeks and beaches.  Some companies have even created "edible" soda rings that will break down in water!

The third graders wanted to protect the animals they met at our creek field trip, so we made art based on Huichol yarn paintings, using parallel lines of marker on square paper instead of yarn pressed into beeswax on wood.  We hope to get funding to make some of these into permanent signs by the creek, asking visitors to "Leave No Trash Behind", "Make Ripples: Pick Up Trash", and "Save Our Stream".  Here are a few of my favorites: 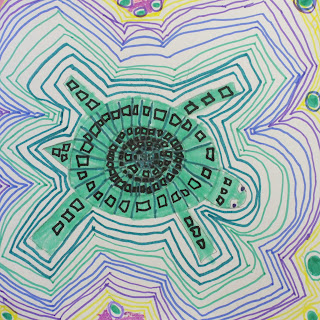 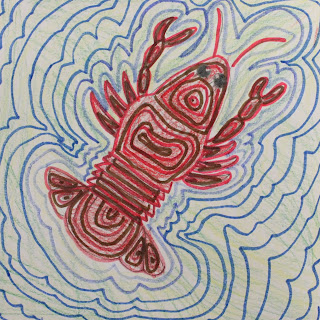 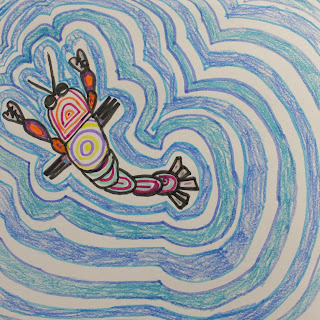 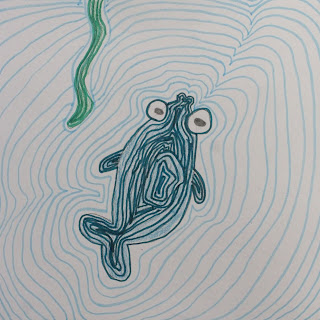 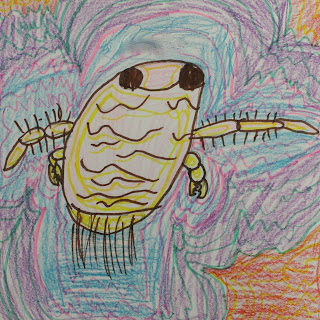 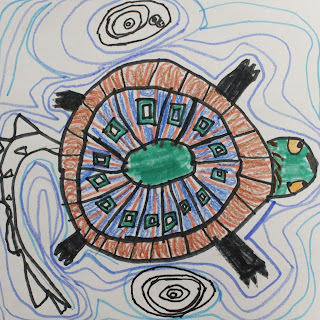 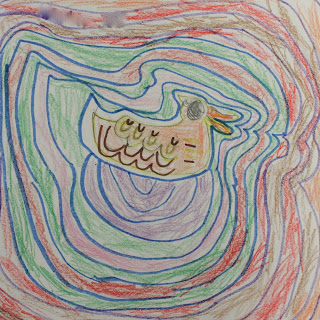 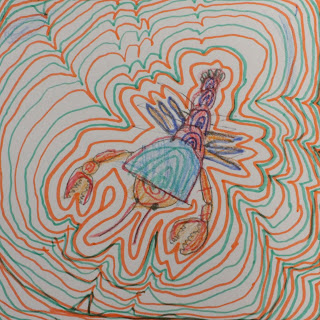 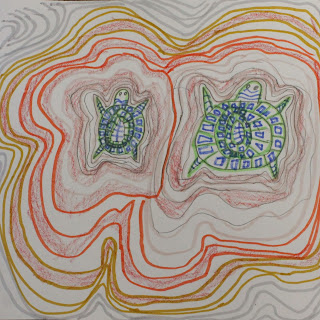 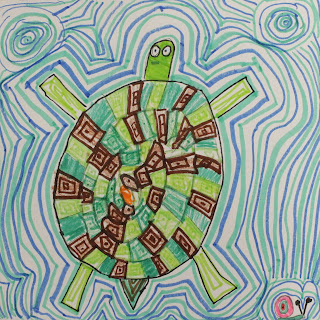 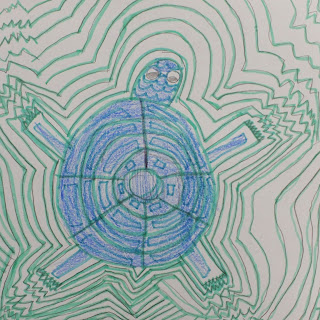 Keeping trash out of the water is one important step.  But more is needed.  What about warming oceans causing wildlife to move away or die out, lead in the pipes leaching out from untreated, corrosive water in Flint, Michigan and many other places, oil pipelines under rivers that water protectors are trying to block, fracking polluting ground water?  If we don't protect our water, we doom ourselves as a species.

The Standing Rock Sioux tribe, along with many other tribes, others across America and globally, and now several hundred veterans have taken a stand to protect water.  Some have stood in the blizzard, some have collected a blizzard of signatures.  I wrote to our president to stop the DAPL and sent money to the Standing Rock medical team.  The DAPL is nearly completed, but it can still be stopped!  Banks have pulled out from the investment.  People have sold off their stocks in the companies involved.  It's many drops of water that carved the Grand Canyon, and you can be one of those drops!

In Rhode Island, residents are fighting approval of a power plant that would affect the air quality in Burriville.  (The project was green-lighted before any committees had been consulted.)  Corporations and government officials may make unilateral decisions, but they are not all-powerful.  It may take a lot of people, but change can be made and our resources protected.  Even now, I am following a bill that would allow the government to seize Native American land for its own purposes.  It hasn't even gone to Congress yet, but I wrote to my Senator.  Another project I'm watching is a possible pipeline from Nova Scotia to Block Island.  I'd rather help get it stopped before it gets started.  Water is life.

Posted by 15minutefieldtrips at 5:09 AM 3 comments: