Pill bugs are, in fact, ISOPODS, as well as the similar sow bugs you may come across when looking for them under logs.  While insects have six legs, you'll count fourteen on a mature pill bug.  (Juveniles have twelve.)  A great accompanying text is A Pill Bug's Life. (Alibris.com may have used copies).

They do have an exoskeleton like other arthropods (insects, crustaceans, arachnids, scorpions) and antenna, but so much makes them unique.  Their copper-based blood is BLUE and they eat their own shed skid and waste to retain this copper.  When they get too large, their skin splits across their middle, like a belt.  The top half loosens and sheds first, like a thrown off shirt.  The back half follows.

While "bugs" may lay eggs on leaves or in water, these isopods carry their babies in a pouch and the mothers keep the babies with them as they both devour dead leaves.  These guys are important DETRIVORES, eating dead leaves that would otherwise build up in the environment and helping return nutrients to the soil.  They also get help from other detrivores, like worms, slugs, beetles, and bacteria and fungus.  They are nature's recyclers!

For defense, pill bugs roll into a ball, thus their other common name: Roly Poly.  My first grade students (second through fourth grade students will enjoy this lesson too) got to handle them and their tickle legs in class and draw their habitat this fall.  We keep them in a large plastic container I drilled holes into near the top for air.  The bottom was lined with gravel to hold excess water and topped with potting soil.  Next, we added a few small sticks, a bunch of brown oak leaves, some moss, and regular spraying of water.  We've have five generations of the little guys in there and occasionally find shed exoskeletons, which look like tiny finger nail clippings.

For the art, we used:


We first drew a birch log as featured in A Pill Bug's Life.  I also keep an actual birch log for study.  I instruct my first graders to draw a tall oval by drawing a rainbow line with a smile.  We drew two horizontal lines from the edge of the oval and connected the open end with a curved line parallel to the nearest side of the oval, to create a cylinder.  Tell students not to worry if their line is straight because trees rarely are.  Next, we added a short branch or two, starting with an oval and drawing two lines toward the trunk.  Examining the actual log, we noticed the bark was covered with broken lines.  Students used black, brown, and/or gray to draw broken lines around their cylinder.  (Older students should keep lines parallel to curved edge of cylinder.)  We also noticed lines were thicker and zig-zag where branches met the trunk.  They could also add rings to cut end, peeling bark, holes, and any other details they saw.  Finally, we colored the rest of the bark white.

Next, students drew a line going behind their log, again not worrying if it was straight.  (We had done this on two other occasions, drawing a table behind a fish bowl and a wall and floor behind a chair.)  On the previous week, we had examined leaves, drawn and cut them out of "fall colors", and glued them to a cardboard bracelet made from a cut cardboard tube.  I recommend demonstrating how to draw red and white oak leaves, red and sugar maple leaves, sassafras, and other leaves, encouraging them to use red, orange, yellow, and brown as they cover the ground around their birch log.  As we had also looked at snails and worms, some students added those as well.  A few rocks or stones are welcome too.

For the pill bug, students folded silver paper in half and cut out semi-circles.  We used six semi-circles to build pill bug: Glue five going in the same direction and glue last one facing opposite direction for the head.  Use silver scraps to cut antenna and if desired, 14 legs.  Glue on Googley eyes on antenna side and glue isopod to habitat.

Here are two examples from first graders, circa 2015: 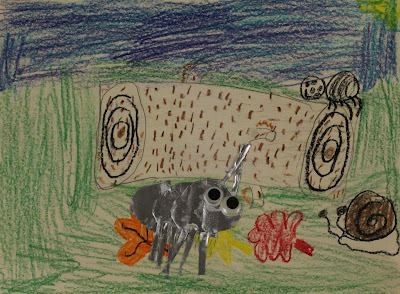 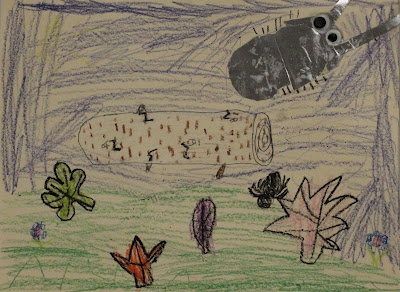