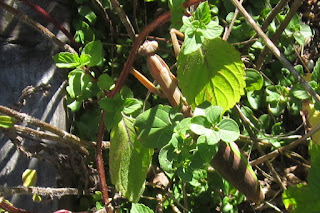 Preparation: Gather tubes as part of a recycling project and gather twigs and sticks outside, perhaps while gathering leaves for a leaf hunt as well.  Gather pictures of preying mantids (there are many kinds, showing camouflage and mimicry).  Correlate lesson with science unit on insects, animal adaptations, and/or food chains.

I like doing this project in the fall, when female candid are about looking for a place to lay their eggs.  They are quite large by September and easier to find.  Also, windy days may yield more twigs for legs and leaves for wings, as described below.

Review parts of insect from their science class (head, thorax, abdomen, six legs, two antenna, four wings).  Sing and act out “Head, thorax, abdomen” ala “Head shoulders knees and toes”. Students will learn insects facts throughout the class during small group engagement, including: Many insects have wings, but not always their whole life, such as caterpillars have no wings but the adult butterfly does. Some ants gain wings and others never do. Insects lay eggs. Some eat plants, and some other insects.  Preying mantids eat insects. Sometimes the female eats the male after mating to provide nourishment for her eggs, which will become baby mantids.

They are called preying mantis because they hunt, and sometimes praying mantis because the bent front legs resemble praying hands.  Mantids have been an endangered and protected species, as there are far fewer than there were before. Some mantids resemble leaves or bark to camouflage themselves from their prey, blending in with their environment. Many even change color, from green to brown. They will stay still, moving only with breezes, to better hide from prey. Students can imagine what it is like to be a preying mantis to write a persona poem.

Showing insect diagram on board and finished example, explain how project will not use tape or glue, only paper joining and construction. Several paper-joining techniques will be demonstrated: To cut tabs to fit slots, pinch paper tubes flat to cut slits or triangle holes rather than "stabbing" tubes, cut larger triangle holes to insert whole tubes (such as thorax to head), cut two crossing slits in a "plus" sign that will bend inward in a diamond shape to hold the ends of tubes. A stress will be placed on not "stabbing" tubes to form holes. (Tubes can be cut open to cut out symmetrical wings with tabs or students can insert leaves as wings.)  Use sticks for legs, first flattening tube and cutting three slits on each side, near to the head.  To make antenna, cut two parallel slits and fold up antenna.  Optional, paint mantis with green or brown paint or use oil pastel.

Extension: Have students hide mantis sculpture in school yard. Give class 5 minutes to find someone else’s. The last one found is the winner (best camouflage)!  By using natural materials instead of chenille stems or flexible straws, if a leg gets lost, it will not harm nature.