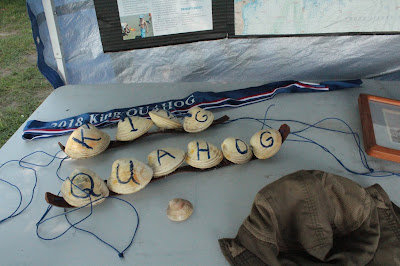 Today my daughter and I had our first experience clam digging.  We met up with Jodi King, quahog fisherman for life, Kim Sullivan of DEM, Azure from Shellfish Management, a host of volunteers, and several families to try our hands at raking up some clams!  Jodi had started when he was 8.  Now 54, he had lots of information and stories to share about like around Narragansett Bay. (Check out Shellfishri.com.) 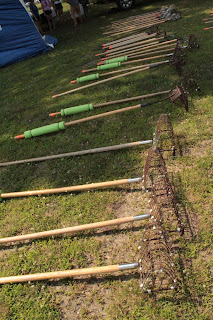 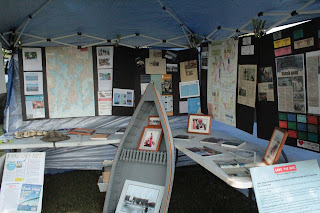 Rhode Island is a small state, but with 384 miles of coastland, it truly is the "Ocean State".  The bay is cleaner than it was in the past and constant vigilance helps it get even better.  A recent surprise rainfall this week closed the Warwick location that was planned, bringing us to Narragansett Beach off Beach Road.  When it rains, untreated pollutants are carried into storm drains and empty into the bay.  This can happen with as little as a 3/4" inch of rain! Pollutants can include animal waste, oil from cars, fertilizer, and more that can all be prevented.  New rain collectors keep the flow into the bay down and that water is treated.  But the next time you think about washing your car in the driveway and hosing off the suds into the street, don't.

Back at the beach on a 95 degree day, I put on SPF 100 and enjoyed the shade of a great oak tree.  (I found tiny mushrooms around it.  Trees cool air by as much as 20 degrees.  A city with hot asphalt would need 40% tree canopy coverage to reduce the warming effect of the asphalt.)  The water was shining.  Jodi explained how the clams look black when you dig them up because they've been in the mud.  They turn gray to white after being washed and exposed for 2-3 days.  They'll keep for 30 days in the refrigerator.  As a veteran shell fisherman, Jodi has seen lots of change and sticks to good practices (such as staying with legal sizes).  His career has let him buy a house, Corvette, and large truck, so he calls the quahogs his "Black Gold", as well as his ship.

After a few more very entertaining and even very sad stories, we were released into the water.  My twelve year old had pulled out her headphones and put her phone down listening to Jody.  Now she trudged along tiredly after her sleepover.  We were out there for an hour and she couldn't believe it had been that long as she was having too much fun pulling hermit crabs up with her feet.  We found at least a dozen of them, two whelks, three spider crabs, and one top neck-sized clam.

Even though our clam digging wasn't very lucrative, it was a great experience.  Jodi served raw clams on the shell and steamed ones with his recipe of olive oil, basil, garlic, and red pepper flakes (plus two ice cubes to steam).  It was all delicious!!! Jodi was even interviewed by Bobby Flay (Episode 28) when the famous chef wanted to get the flavor of Rhode Island.  As I only went home with one clam and one whelk, I carefully steamed them plain so I could savor their flavor without influence.  I had never had a whelk before, but every bit was tasty.  Butter and garlic would only enhance it.  I also went home with some iridescent oyster shells, Wampum purple in the quahog shells, a scallop shell, and a colorful horned snail (whelk) shell after I ate it. 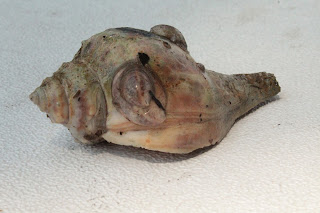 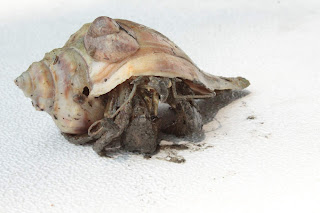 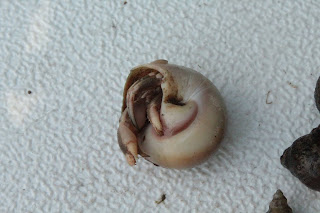 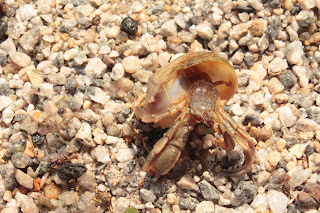 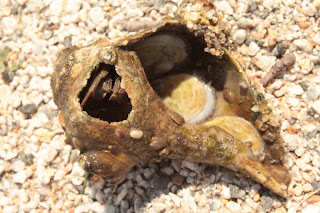 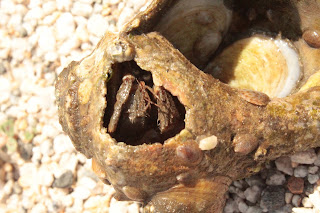 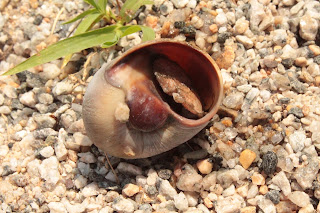 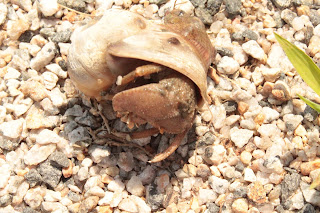 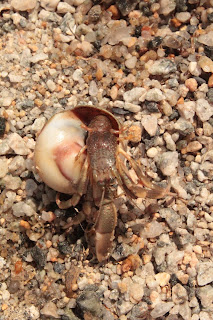 If you want to try clam digging, you can collect a half bushel a day (4 gallons) of one inch or larger clams as a Rhode Island resident.  Call 401-222-2900 to make sure your spot is safe to shellfish that day.  Jody does classes with DEM, the Brown BELL program, URI, and more.  The state needs new, younger shell fishermen and women to take up the trade.  In 2003 there were only three oyster farms and now there are eighty!  Even if you don't like seafood, clams can filter (and clean) 25 gallons a day and oysters can filter 55 gallons a day!  These little guys help clean our bay and provide food, work, and careers for us.

Another way to protect the bay is to vote and use your voice.  Rhode Islanders kept out a huge seaport in 2003 and fought against off-shore drilling.  Protect this valuable resource!  It's worth more than the occasional pearls.  Water is life.

You can also support 15 Minute Field Trips in its mission to empower youth to advocate for the environment through art and action.  Hit the "DONATE" button at the top right.  We are a 501(c)3 non-profit. 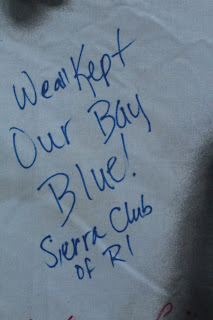 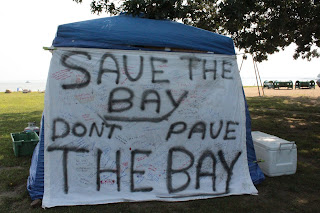 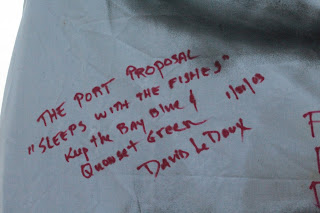 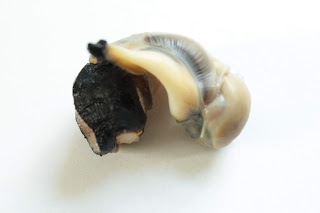 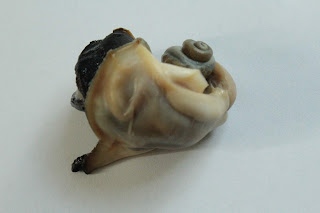 Posted by 15minutefieldtrips at 3:36 PM No comments:

Check out our new workshops! 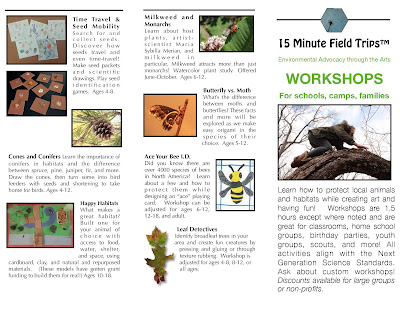 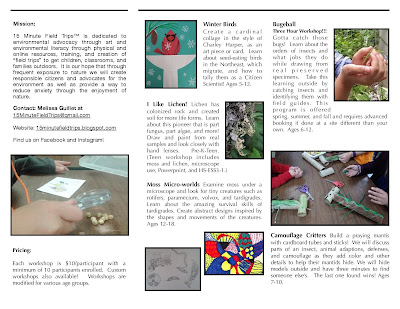 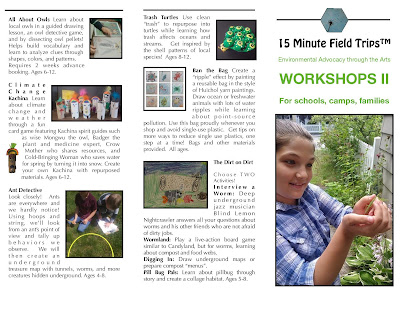 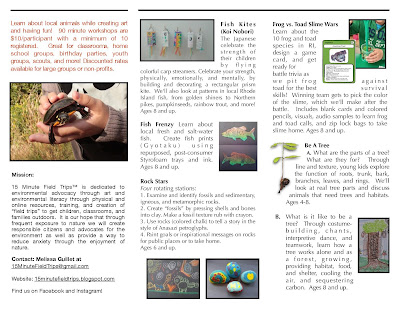 Posted by 15minutefieldtrips at 9:08 AM No comments: 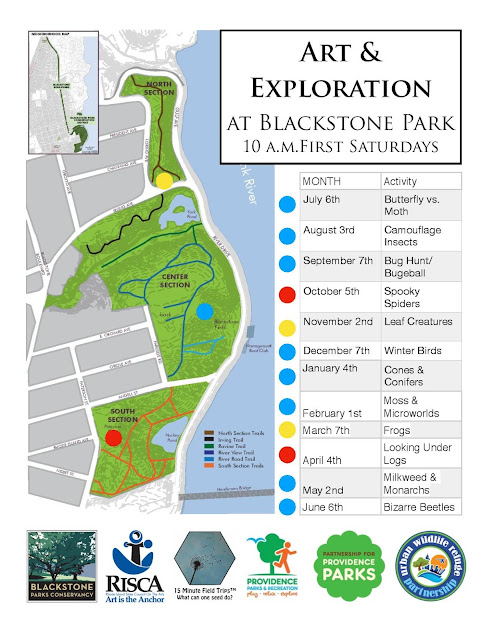 Posted by 15minutefieldtrips at 1:27 PM No comments: