Clean Up on Crescent Beach 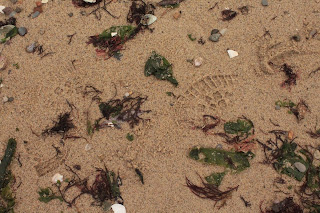 Footprints in the sand.  About twenty individuals, including several local families, trekked the beach across from the historic Crescent Park Carousel for two hours, collecting trash.  This clean-up was sponsored by Save the Bay and the Riverside Renaissance Movement.  With plastic gloves and garden gloves on top, my partner and I mostly focused on glass, collecting 1,360 pieces and not even getting it all!  (On bag of just glass weighed 14 pounds!)

I saw the teens gleefully cart away tires, blankets, and other large items.  But the glass kept calling me, its texture glossy against course sand.  Yet it took a careful eye, as shiny shells competed for my attention as well.  There was a lot of pottery collected as well.  Thankfully, very few cigarette butts.  A few pieces I thought were Styrofoam were actually worm-eaten clam shells.  What I thought was plastic was seaweed.  What must the animals think of our man-made detritus?  I'm interested to know what everyone else collected.

On October 26th, 6 p.m. "Plastic Ocean" will be screened at the First Unitarian Church in Providence.  Afterward, I will be doing a kids workshop to make turtles out of trash while adults discuss film.  Details below:

A Plastic Ocean is an adventure film in which searchers for the elusive blue whale find instead oceans filled with plastic waste. Incredibly captivating, beautiful and moving, the film rethinks our everyday use of plastics - from shopping bags, straws and plastic tableware to food containers. Over time, most of this plastic breaks down into tiny pieces invisible to the naked eye, which are consumed by marine wildlife and contaminate the food we eat. These microplastics pose a serious risk to ocean and human health worldwide.

Doors open at 6:00 pm with refreshments and socializing. The 22-minute educational film starts at 6:30 pm. Afterward, there will be a discussion of causes, and practical ways to react to this pollution.

Please bring information or a sample of your favorite eco-friendly product to show the group.

Kids are welcome! Bring a clean used plastic container such as a bottle or yogurt cup to make a ‘trash turtle’ craft.

Sponsored by The First Unitarian Green Team and Benevolent Street Zendo/Ecosattva Sangha
This event is free. So that we may plan accordingly, please register at: www.bit.ly/2CPs0mK

Posted by 15minutefieldtrips at 4:14 AM No comments:

What Can Babies Tell Us?

How can babies tell us about their environment?  Recently, I visited three locations and collected macroinvertebrates (small and mostly immature insects still visible to the naked eye) from the ponds at Borders Farm in Foster, Buck Hill Wildlife Management Area in Pascoag, and Trustom Pond in Matunuck.  Different species have different pollution tolerances, so certain species would indicate how clean the water was.

I first collected at Borders Farm, which has a small retainer pond with cattails, grasses, lily pads, algae, and lots of frogs.  I was there to run an insect workshop and in the past another collector found a number of insects as well as leeches.  I went into the shallow water with my rain boots and clean white plastic tubs, swishing my net back and forth through the fairly clear water.  It was teeming with water boatmen and I dumped every scoop into one of the tubs I had added pond water to.  I picked out the plants, swirling them one more time in the water and examining them before returning them to the pond.  I added clear pond water to the other tub and brought them both over to the table.    Then I waited for the sediment to settle.

Photographing these creatures posed its own challenges.    It was a sunny day and we were set up in the shade.  The sun was in my eyes most of the time, plus I was running a workshop.  But I did get a few shots of some of the creatures.

Very pollution-tolerant are aquatic worms, blood worm midge larva, left-handed snails, and red-tailed maggots.  I'm sure I didn't find every species in that pond, but I saw all but the maggot larva.


Next in tolerance are the midge larva, like the phantom midge above, planar (flatworms), black fly larva, and leeches.  Moderately intolerant to pollution are the damselfly nymphs, dragonfly nymphs, sowbug, crankily larvae, clams, and scuds or amphipods.  We found two dragonfly larva and a few scuds.  At the least tolerant tier are the stonefly and mayfly nymphs, riffle beetles (adult and nymph), caddisfly and dobsonfly larva, water penny larva, and the right-handed snail.  Below, see the mayfly nymph! 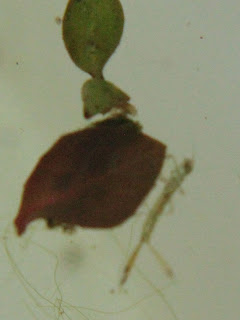 This was so exciting and I wanted to do it again with more time to improve the photography.  At Buck Hill, I repeated my collecting with my cleaned, bleached, and rinsed bins to have another look.  I moved the bins to a sunnier spot, still struggling against glare and shadows cast by either me or the sides of the bins.  But I got a few better photos and a few people interested in what I was doing, including an older couple walking their dog and a man from the USFS!  ("No, I wasn't with DEM.  I was just taking pictures before I let them go.  Do you know...") 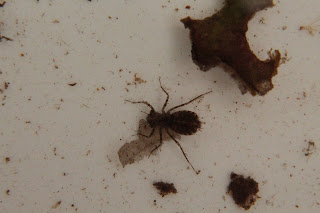 I did the usual sweep through the plants and dump.  With the many oarsmen at Borders, I was looking for movement.  But then I saw something big drop out...  What WAS this?  I saw the long projection and guessed water scorpion, my guides left at home.  And it was!


On to Trustom Pond, a much larger body of water with frogs and painted turtles.  There were oarsmen again, and my first leech!  It was on a turtle we caught and  stubbornly clung first to the turtle's shell, then to the boardwalk, then the tub.  (The turtle snapped the stick with its beak and hissed at us, but after a few quick photos, we let it go.)   Doing more sweeps, I brought up a lot of muck.  As I swished through it, we found many aquatic sowbug (isopods).  There were also dragonfly and mayfly larva.  All three locations were quite clean! 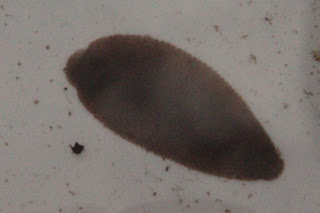 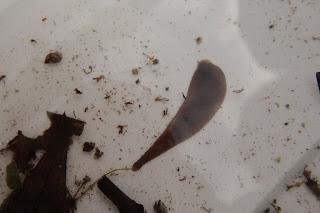 Basic rule of thumb is the cleaner the water, the more biodiversity you will see.  The air-breathing species are more tolerant because they don't breathe the water.  Gilled creatures are thus more sensitive.  Seeing a pollution-tolerant species does not mean the water is polluted unless that's all you find.  Here's a good guide: https://scioly.org/wiki/index.php/Water_Quality/Macroorganism_List

But I know you're wondering about that turtle...

If you'd like to schedule a workshop in RI, MA, or CT, message me in the comments or at 15minutefieldtrips @ gmail.com.  (Spaced to stop robots from messaging me, lol!) I also  cover other insects, birds, fish, turtles, seeds, plants, and composting.  See you outside!


Posted by 15minutefieldtrips at 6:31 PM No comments: