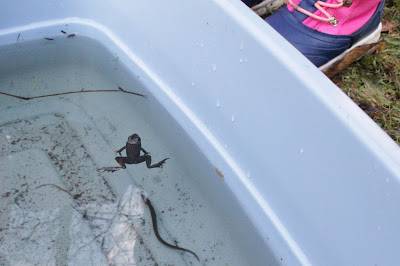 Two weeks ago, I, along with 7 parent volunteers, four teachers, our principal, and Sandra Wyatt from Barrington Land Conservation Trust, took 63 third graders along the Annawamscutt creek from our school in Riverside, through the woods, across a parking lot, across a busy street (with the help of an officer), and through ASRI-protected land to the other end of the creek to meet ASRI Senior Director of Education Lauren Parmelee and teacher Doreen Schiff and her 8th graders to study the creek.  Along the narrow path I had cut as much briars away from and had even moved a fallen tree, we found deer tracks and scat.  Kids and even adults commented that they had no idea this was even here, and we weren't even a mile from the school!  A few third graders even asked if we were going through a jungle in response to the path shaded by maple, oak, and beech trees, native wildflowers, and invasive bittersweet.

Some had been concerned about what could hurt them out there.  I told them we were unlikely to see many animals on our walk, being a large group that animals would hide from.  Even so, birds, deer, foxes, etc. would not hurt them.  In the permission slip and on the day before, I reminded them to wear good sneakers and long pants and sleeves, because there would be thorns and possibly ticks and poison ivy.  We made the slightly over 2 mile trek from Riverside to Haines Memorial Park in Barrington and back with one scratched leg.  Our nurse did a pre-cursory tick-check back at the school.

Yes, we opened the minds of third graders walking a mile away from their comfort zone (and the comfort zone of a few adults too)!  Yes, many of the kids thought it was a "jungle".  But I also heard them feeling empowered.  They were proud of themselves for taking this hike on.  They felt brave.  They were excited and felt like a team.


When we at last arrived at the other end of the creek, groups of about twelve rotated through six stations.   The first two stations were run by 8th graders from St. Luke's school in Barrington along with their teacher Doreen Schiff, where one station had 8th graders using skeins, nets, and leaf packs to collect fauna from the creek the third graders had help identifying and using charts to note their pollution-tolerance.  The second station involved match cards of macro fauna to their pollution-tolerence to examine different scenarios of what different findings told them about the cleanliness of the creek.   ASRI Senior Director of Education Lauren Parmelee and Ginger from Barrington Land Conservation Trust assisted. 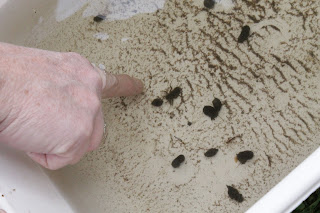 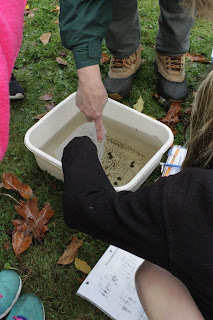 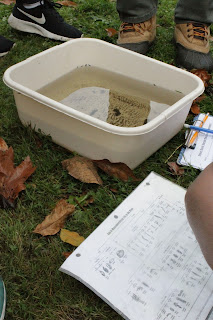 Meanwhile, at the other four stations...

Kids also played Deadly Links (modified to act out as mosquito, dragonfly, and frog in this popular game from Project Wild), created a food web wearing pictures of animals, insects, water, sun, air, soil, and rock clipped to their shirts and passing a rope back and forth to create a "web" of how they were connected, and matching juvenile animal pictures with their adult ones (frog and tadpole came easily, but dragonfly and nymph less so).  We rotated stations every 15 minutes, so the whole trip at the park was an hour and a half.  15 minutes was enough time to run every game, with some playing twice.  Then we had a picnic lunch and carefully collected all trash.  We want to do this trip every year now!
More from St. Luke's: https://prezi.com/1xpqxmufa2w7/annawamscutt-creek/
Posted by 15minutefieldtrips at 5:51 AM