When a Child Kills a Bee 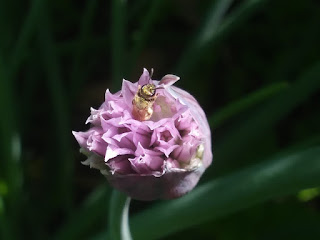 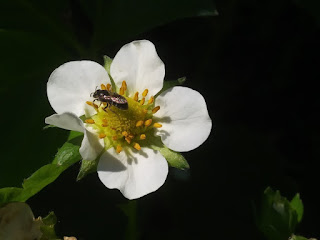 I was excited.  I had just learned several new activities in my School Garden Mentor course the previous evening and I wanted to try them out with my second graders.  I explained we would be playing 2 games outside and half-way-through, we would switch games.  Group A would do the egg carton activity first and group B the ant-eye view.

I started off explaining the egg carton activity where I had written two words on the bottom.  (Lesson plan here.)  I started with the trickiest: living and non-living.  We had touched on that concept months earlier when the students built a habitat for their beetle and they had to include sun, water, rocks, etc, with "air" implied.  Once they understood better, we discussed how those words related to each other.  Were they the same?  No?  What were they?  "Opposites", a student answered.  I also added you could call them antonyms.

We looked at the words smooth and fuzzy and discussed what those adjectives meant.  They had given several examples of large objects for the previous word pair.  I demonstrated how they would look for objects to put in the egg carton that would actually fit in the egg carton.  They could pick leaves and flowers from the garden, but if it was a big leaf, maybe just take a piece.  We reviewed the other words (hard/soft, light/dark, moist/dry, scented/unscented), with me prompting them to give me the opposite of the first word I read.  I also demonstrated a Venn diagram with two hoops the kids would be free to use outside. 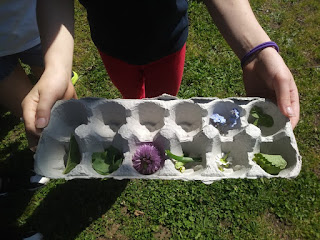 For the ant activity, we went over ant behaviors on a clip board.  They would work in partners (for both games), where the other partner would place the string on the ground and they both would follow the "trail".  They could do this multiple times and switch off placing the string each time.  The focus of the lesson was to get them better at observation.  They excitedly told me of many actual ants they saw during both activities, walking, climbing, and carrying things. 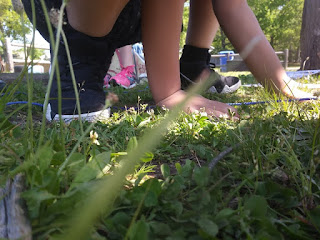 We reviewed expectations for the hall (walking quietly) and outside (stay in the fence area) and made our way outside.  I had kids compare data with each other and we switched activities halfway through.  The activities were very quick, and I wrapped it up quickly so we could go inside and share our findings.  Most students worked well together.  One I worked with alone.  Two others I gave special assignments to.  A student who regularly misuses materials I put in charge of carrying the big crate.  Then a student purposely stepped on a bee...

I got the line together, prompting and waiting for quiet before we went in.  I told them we'd go right to the rug to share.  The student who stepped on the bee I had talked to outside about being kind to animals and he wanted to share it with the class.

We got to the rug and started by sharing about our cartons.  The kids had many observations and stories about what they had seen just then or at home.  My student who had killed the bee wanted to share, so I let him tell his story.  We talked about how we can better understand something we might be afraid of.  Kids suggested asking an adult or looking in a book.  The student suggested catching the insect and observing it.  I told them they were all good choices.

I was upset when this student killed the bee.  But I also knew it was out of fear and ignorance, and rather be angry with him, it could be a teachable moment.  To the untrained eye, every bee is a wasp and every three-leafed plant poison ivy.  It's up to environmental educators, teachers, and others "in the know" to educate others.

For our third grade field trip two weeks  ago, I sent home safety tips about ticks and poison ivy (wear long pants and check your child at home) out of an abundance of caution.  One parent kept her child home.  No one who attended the field trip got hurt, bitten, or poison ivy.  (One child had a slight heat rash.)  That parent had every right to keep her child home, but I'm sorry she missed the experience.  You won't reach every person every time.

The bee that had perished had been a leaf-cutter bee.  I told them it cut leaves with its mandibles (it had a tongue for nectar), but didn't eat the leaf.  We brain-stormed what that leaf might be for.  I reminded them of the carder bee that lines its nest with plant fibers.  The leaf-cutter uses leaves to build its nest for its eggs.

That morning, we had done observational contour drawings of our hands.  Last week, we had designed playing cards featuring bees.  I told them we'd be putting a sign in the garden to tell them all about bees, featuring their artwork.  Their hands could change people's views.  They could protect animals.

I'm hoping this lesson taught them not only to become better scientific observers, but also to ask questions about what they don't understand.  We live in a society that is increasingly diverse.  I struggle myself not with accepting diversity, but with understanding people better from his/her/their  point of view.  I ask questions to see if I've got it right.  I don't always do, but I am open to learning.

Five years ago, when my daughter was six years old, we went to a protest to protect the bees.  She explained "communication" to me: "It's like when a bee goes 'buzz' and another bee goes 'buzz' 'cuz they want to race up the mountain or something."  A hive of people marched, supporting real food and protecting the environment and the bees. One 9 year old boy was hoarse keeping up the chant and holding up his huge sign, keeping the adults going.  The work continues... 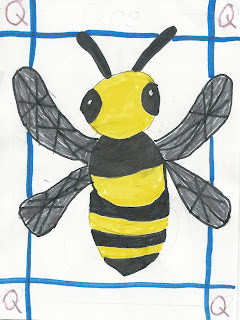 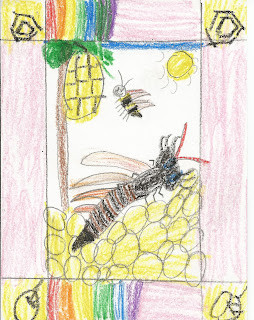 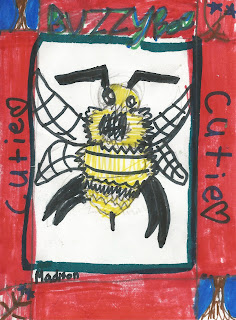 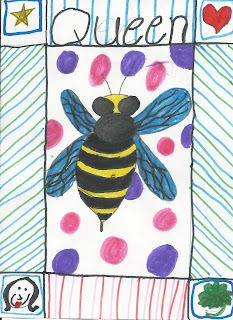 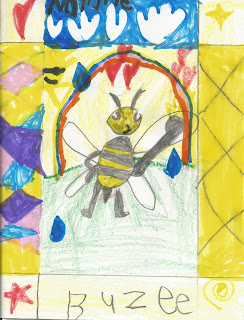 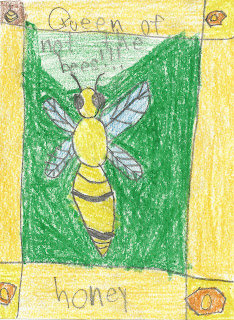 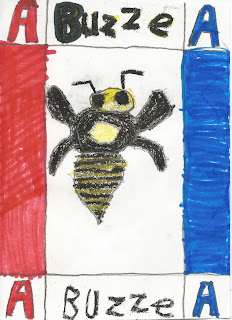 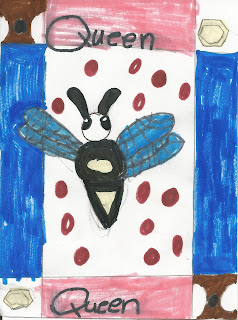 Surprised cry as she steps
across the deck, I rushing
to soothe and seek the cause.

Both barefoot, I find
no pebble, no splinter, but
bending down, a bee
bent like a staple, severed
abdomen pulsing in her arch.

I worry allergies and shock
to a two-year old easily pacified.
But when I show her the bee
and explain what he did,
her happy-go-lucky ways go
homicidal.

With the toy she was chasing,
she pummels the dying creature,
fist tight with wrath.
“Okay, it’s dead,” I assure her, or
myself, or perhaps mostly,
the bee.

I lift her in flight
to the bathroom, a wet cloth and tweezers.
The abdomen falls away easily
but the stinger persists.

She doesn’t trust my explanation,
so I demonstrate, pulling
a hair from the mole on my arm.
Assured, in seconds
the stinger is out.

I bathe my daughter
in kind words, warm water
soothing the pierced skin,
hide my discomfort
my daughter has learned

I wrote this about my daughter's first experience with a bee.  Then we learned to catch them with containers to watch before we release them .  Once, she found a bumble bee exhausted on the ground and picked it up with her hands.  It pinched her with its mandibles.  She didn't blame the bee.

Posted by 15minutefieldtrips at 9:00 AM